A Comparative Study of Science and Arts Curriculum as followed in U.P.Board at+2 Level

Introduction:-
Education, by its very nature, influences and gets influenced by the whole developmental process. There is hardly any filed of activity or sector of development, which is not influenced by education in some form or the other. There is no sector of development which does not have its impact on the system of education. Therefore, the dynamics of education and its role in social transformation and national development makes it essential that the content and process of education are continuously renewed in order to make them in tune with the changing needs, aspirations and demands of the society.
Thus, the fulfillment of the aims of education according to different philosophical thoughts is only possible through a suitable curriculum. Curriculum is the source of acquiring educational goals. It is indeed the heart of the educational process. The quality of education, irrespective of the system under which it is provided, depends ultimately upon the individual, and the social relevance of the curriculum and the extent to which it is effectively transacted in educational institutions. The direction to the curriculum is provided by its education objectives from which, in a manner of speaking, it derives its shape as well as identity. The challenges and the takes that await Indian education have been succinctly expressed in the modified version of National Policy of Education (1992)
Curriculum:-
In the broadest sense the term ‘curriculum’ ordinarily is used by specialists in the field in two ways-
1. To indicate, roughly, a plan for the education of earners and
2. To identity a filed of study.
Curriculum as a plan for the education of learners usually is referred to as a curriculum or the curriculum. At present there is significant disagreement among curriculum specialists with regards to the ingredients of the plan. Curriculum as a plan for the education of learners is part of the subject matter of the curriculum filed.
Curriculum as a filed of study, like most specialized fields, is defined by-
i. The range of subject matters with which it is concerned (the substantive structure) and
ii. The procedure of inquiry and practice that is follows (the systematic structure).
The word ‘curriculum’ comes from Latin rout meaning ‘race course’, and traditionally, the school’s curriculum has represented something like that figuratively speaking, of course- to most people. Indeed, until quite recently, even the most knowledgeable professional educators regarded curriculum as the relatively standardized ground covered by students in their race towards the finish line (a diploma). It should not be a surprise, their to find that many current concepts of the curriculum are grounded firmly in this notion that curriculum is a race course of subject matters to be mastered.
Objectives of the Study:-
Research in curriculum deserves more attention than it has received so far. The school curriculum is in a state of continuous change all over the world today. Against the striking curriculum development in the advanced countries, the school curricula in India are narrowly conceived and largely out of date. This curriculum places undue weight on bookish knowledge and rote learning. As the development of useful skills and right kind of interest, attitudes and values are not properly emphasized, the curriculum becomes not only out of step with modern knowledge, but also out of tune with the life of people. There is, therefore, an urgent need to raise, upgrade and improve it. Hence the present study has been taken.
Hypothesis:-
“There is no significant difference between Science and Arts Curriculum as followed in U.P. Board at + 2 level on various dimensions of curriculum.”
Population and sample of study :-
The population of the study includes all the teachers ad students at +2 level in schools affiliated to U.P. Board in Allahabad district.
Stratified Random Sampling has been used to collect the data. The sample in the study contains 100 teachers from U.P. Board at+2 level. 50 teachers from Science stream and 50 teachers from Arts stream.
Analysis and interpretation of data :-
The hypothesis under study reads that there is no significant different between science and arts curriculum as followed in U.P. Board at +2 level on various dimensions of curriculum. Five dimensions i.e. academic, practical, scientific temper, characters building and socio-cultural have been taken under study. The hypothesis also has been divided into five sub hypotheses to interpret the data more clearly. Each of five sub hypotheses has been tested by employing t-test of significance. 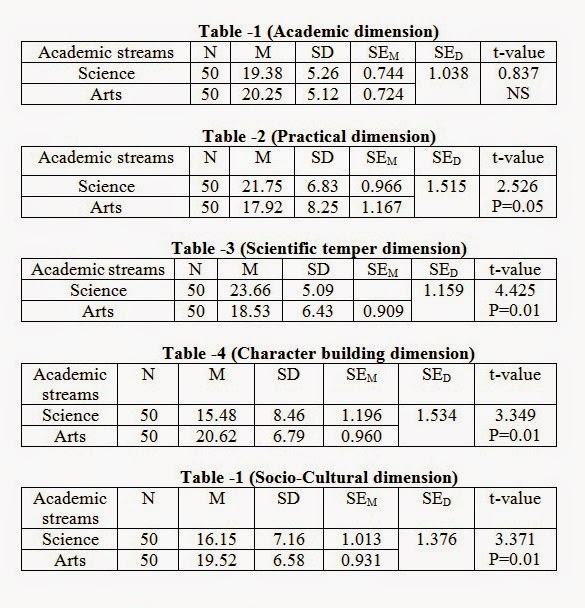 It is, thus, evident from table 1 to 5 that out of 5 t-values calculated for comparing curriculum of science and arts academic steams under U.P. Board on various parametric dimensions of curriculum 4 t-values have come out to be significant and remaining 1 t-value has not come out to be significant. Out of 4 t-values, 3 t-values i.e. for scientific temper, character building and socio cultural have come out to be significant at P=0.01 while 1 t-value i.e. practical dimension has come out to be significant at p=0.05 The t-value for academic dimension has not been found to be significant.
Conclusion:-
Science and Arts curriculum of U.P. Board at+2 level differ significantly with regard to practical, scientific temper, character building and socio-cultural dimensions. Further it may be concluded that science curriculum of U.P. Board imbibes more characteristics of practical and scientific temper dimensions while U.P. Board arts curriculum imbibes more characteristics of character building and socio-cultural dimensions. On the other hand science and arts curriculum as followed in U.P. Board at +2 level do not differ significantly on academic dimension.
References:
1. Arora, G.L. : Curriculum evaluation : Reflections on curriculum, NCERT, New Delhi,1984
2. Chandra Arvinda : Curriculum development and evaluation in education, Sterling Publishers Pvt. Ltd., New Delhi,1977
3. Deshpande, A.R. : An inquiry into the development of the curriculum in mathematics at the secondary stage of education in Maharastra State, Ph.D. edu., Nagpur Uni.. 1992
4. Ghorai, I.: The new curriculum of secondary education in the West Bengal in the light of curricular history, Ph.D.Edu., Cal. Uni., 1980
5. Kalra, R.M. and Singh, R.R.: Curriculum construction for youth development, Sterling Publishers Pvt. Ltd., New Delhi,1987
6. Bhatt, B.D.: Curriculum Reform, Change and continuity, KanishkaPublishers, New Delhi, I Edi..,1996
7. Gupta, S.P. and Gupta, Alka Statistical Methods in Behavioral Sciences, Sharda Pustak Bhawan, 11 Uni. Road Alld..,2005
8. Rai, Parasnath: Reasearch Introduction; Laxmi Narayan Agrawal Publication, Agra.,2005

Posted by Shri Prbhu Pratibha at 00:05